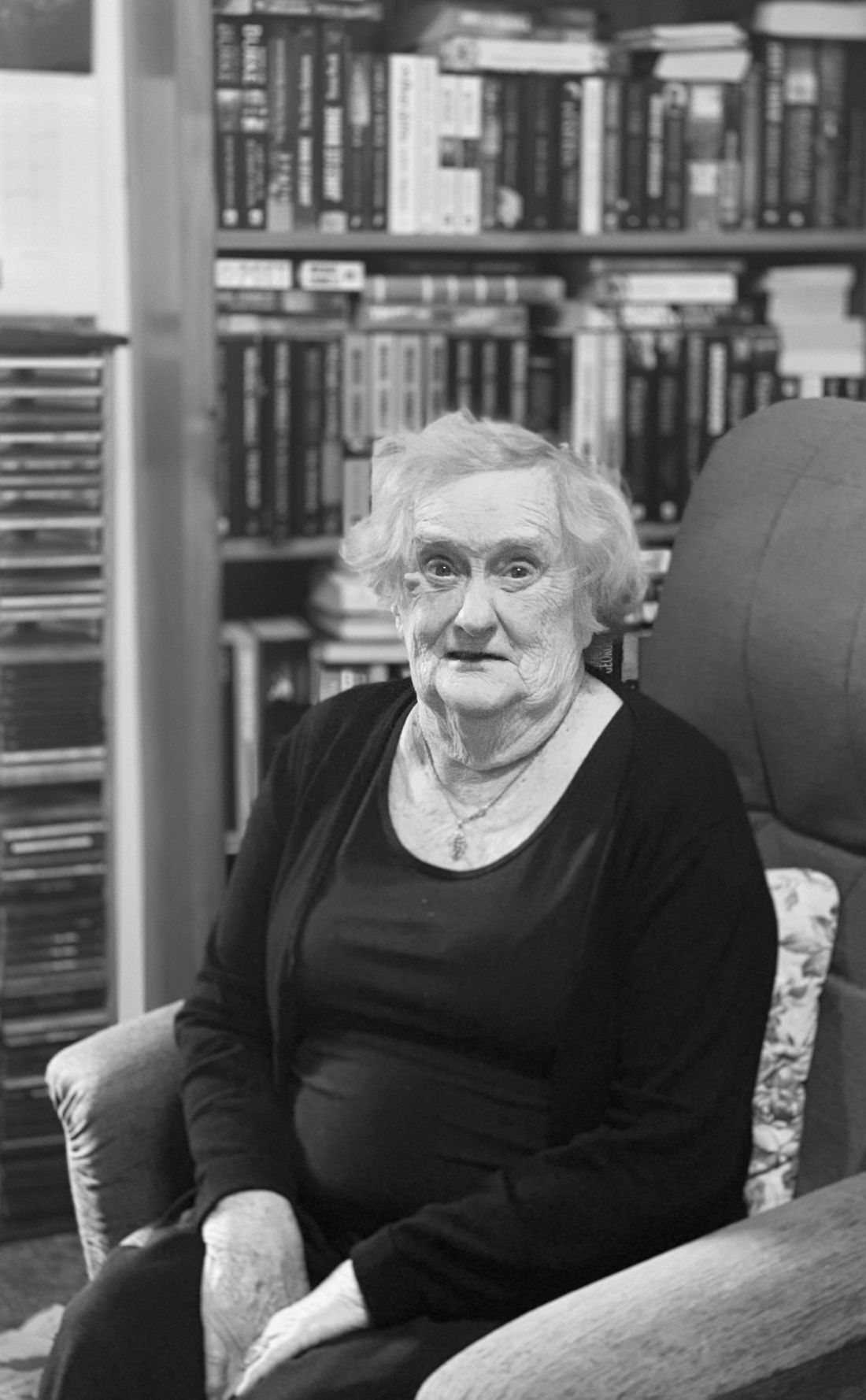 Sitting down to chat with avid traveller, 90-year-old Margaret Smith, I was exposed to far more travel envy than I had bargained for.

From travelling to Asian countries like China, Vietnam and Japan, to hot European summers gallivanting around Paris and cooling off in countries like England, Ireland and exploring the deep lochs and highlands of Scotland.

After setting aside my jealousy, I was taken away by story, to some of Margaret’s travel highlights.

But of course, to begin travelling, especially when we are in our twenties, we all have to take part in some form of daily grind, to afford the luxury of international travel.

“I had to take time off work when I went travelling, of course, I worked at the time.

“My husband worked for one of the executive trustee companies and I did a lot of casual work, and then I ended up in quantity surveying.”

For those who don’t know, a quantity surveyor is a professional in the construction industry with expert knowledge on costs and contracts of large-scale construction – not a bad gig for saving travel money!

“There are only about four quantity surveyors in Adelaide at the time, so I got a lot of work. It was such an interesting job, I really liked it, we worked on a lot of the big buildings in Adelaide. And then I went and got myself pregnant!”

The sharp humorous look flashes across Margaret’s eyes and she begins to say through laughter:

“No, I didn’t get myself pregnant, my husband did that! And I was forty, I thought: Oh God!”

Margaret tells the story of how motherhood in her forties came to be, setting the tone with me that the funny bone in her is well exercised.

“I had four children at the time, but Andrew was the baby, he was the mistake at the end”

She tells me with a wicked laugh but a glimmer of fondness in her eye.

“I remember going to the doctor because I felt ill, and I said I’m really not feeling at all well.”

“He looked at me and he said ‘I think you’re pregnant’.”

By this point in Margaret’s life she had already accomplished many countries, but a good job, a newborn baby and getting older wasn’t going to slow her down.

“When my youngest didn’t come travelling with us, my parents would look after him, they were all too happy to, they made a great fuss of him as it was anyway.”

In whimsical spurts Margaret flashes back to sporadic memories of her favourite places.

Amongst conversation and with no regard for my line of questioning, I got to take down anecdotes like this:

“Japan was so prim and proper, and I didn’t enjoy it as much…China, I liked China, it was chaotic.”

And so that’s how the re-tell of this story goes.

By far, Europe is Margaret’s favourite topic of conversation.

“My husband travelled with me a lot, that was a great time then, when he was still alive.”

“We used to get a train pass in Europe, and you could just go anywhere.”

Trying to narrow down some travel recommendations, I asked, what was your favourite place to go by train?

“One of those greatly magical things that happened to me, as I’m walking along the street in Paris and some Englishman comes up to me and asked me for directions… he thought I was Parisian.”

Margaret has such a wicked look in her eye and a cheeky cackle, I’m sure some people can relate, we’ve all had a moment like that.

For me it was riding the subway in New York and an American woman from Pennsylvania asked me which train to ride to get downtown, I considered answering her for a split second as if I was a New Yorker, but luckily for that woman I laughed and told her I had no idea.

“My daughter and I had taken French classes at one point so we could speak to the locals, but we were so daft, we weren’t very good.”

“I love the French language, it’s a musical language”

“Of course, I travelled to many other beautiful places on Europe, Italy was very fascinating, Italians were just so way over the top, but I just adored Paris.”

“I did all the monuments and places of interest, but I just loved the underground.”

Which begs me to ask:

“You must have been quite brave to travel on the underground by yourself and not speak the language?”

“Well my husband was alive then, so he was with me”

“So did your husband speak some French then?” I ask.

“Oh no no, he couldn’t even speak English half the time!”

And right on cue that wicked laugh erupts from Margaret again.

“We got on alright though, we never took a tour or had a guide, we just did it by ourselves, by train, and that’s the best way to do it.”

“The trains in Europe are wonderful, they’re very efficient and very comfortable, you’ll have meals, and everything catered to you on there.”

I feel it’s important to mention at this point that Margaret never travelled on anything below first class, no matter if it was plane or train.

“I always saved up for first class… I’m a first-class traveller.”

“I am a great train traveller, I love trains, I’ve been right around Australia by train”

“You meet people, who are interested in the same sorts of things as you, you can have meals catered, and sleep aboard… its very comfortable.”

“I mean there’s nothing quite like waking up and looking out your window to a railway station!”

With a nose snort and cackle, I think Margaret was exercising that funny bone again.

Trying to stay on track figuratively and literally, we circle back to the earlier mentioned, over the top but fascinating, Italy.

“Rome really is a wonderful city; the Vatican is beautiful. It is busy and lively and very historic.”

“I like Italy generally, it’s very attractive. When my husband and I visited, I was so thankful that we hadn’t tied ourselves up in a guided tour, where you didn’t have to be adventurous for yourself. We just did it together”

“And of course, when we first went to Europe, Europe was divided.”

“Eastern Europe was communists, communists had control of eastern Europe, and I remember someone saying to me: “don’t smile when you go over the border!”

And through that cracking laugh Margaret adds:

“Don’t look too pleased about anything”

Margaret experienced many places of political turmoil, Manila in the Philippines and even Russia. There are no limits to this lady’s curiosity and adventure.

Some of the cooler political and meteorological climates visited were fondly remembered too.

“Scotland just blew me away; I just haven’t been to a place that beautiful.”

“You think England is a beautiful place…until you get to Scotland, but I wouldn’t tell that to any Englishmen.”

“The Scottish people are so nice too, if you can understand what they are saying.”

As I proceed to tell Margaret that my family is Scottish and I go into the trials and tribulations of understanding various family members, Margaret remembers and proceeds to interrupt me with her epiphany.

“Did I tell you I flew on the Concord?”

“The whole time I was thinking I’m on the Concord, I really can’t believe it!”

I wish I could translate this wicked laugh that keeps erupting from Margaret, just so you could share in the absolute belly laugh that it gives me at the end of each of her jokes.

So of course, this leads us to talk about her time(s) in America. Margaret visited the US many times, four states at a time.

“You know, I figured, I’m not going to do one of these trips that just takes you right across the USA, this is a country I want to see properly, so I did four states at a time.”

However, we only touched on one of her visits to America, before again circling back to Margaret’s love affair with Paris.

From the bright lights and stars of Hollywood in LA, to Vegas which Margaret didn’t like so much.

“I’m not a gambler, I didn’t like Las Vegas much, and I had to try to keep my husband away.”

Then onwards to Arizona to marvel at the Grand Canyon.

“We walked through a part of the Grand Canyon; it’s mind boggling isn’t it?”

“America is a fascinating place, but I loved the South, New Orleans would have to be my favourite.”

“Of course, Europe is my favourite though, because of the vast differences in language and culture, it is just magic.”

So, Margaret finished our chat, in time for her lunch, with some advice for us “young ones.”

“I didn’t start travelling until my late twenties, you have a lot of time ahead of you to travel, and you should.”

If there was to a be a bucket list based off of Margaret’s recommendations it would be this: